During my third year at Art and Technology I followed a minor on concept development. We had a couple of projects for clients with a problem, for which we had to come up with a creative solution. Multiple groups worked on the concept and in the end we had to pitch it to the client to convince them that ours was the best.

The University of Twente was our client in the Media Battle. We had a weeks time to come up with a concept for their problem. They had in the near future a congress for their nano research center. The problem was, that the research facilities themselves had to stay sterile so not all visitors would be allowed to take a look inside.  While listening closely to our clients and asking the right questions we found out, that their facilities were unique in the way that they did not only have the right tools and scientific expertise but also knowledge about infrastructure and commercialization. Having all this in the same spot made them unique. This is the reason why we decided to make a meeting place where all the people on the congress could meet so that experts of those three domains could get in conversation with each other and maybe do business.  To help this proces we decided to give every visitor a Lego brick  with one of three colors which stand for science, infrastructure or commercialization (Lego bricks are also often used as metaphor in nano technology to explain how elements are build out of smaller components). If three people with different color Lego bricks present these at the meeting place they would get a special kind of beverage. The meeting place would be a bar called the Nano Bar. Since not all visitors were able to go inside the facilities themselves, the bar would be decorated to resemble the actual Nano Lab. Screens would have been set up with live footage from the facilities, allowing people to follow what’s going on inside as if they were there themselves. Meeting other people here and talking about Nano science would give the visitors an experience they would remember. In the end we won the pitch with this concept. 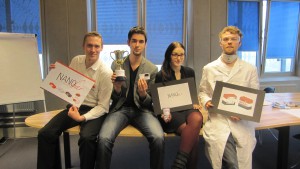 At the end of my minor we had a similar project, but for this project we had different teams and more time. The assignment this time was given by WBO Wonen, who were planning to build a new community center in a district of Oldenzaal called the Thij. They wanted us to come up with an interesting installation where kids could play and have fun together. But after some research at the location we found out, that the residents of the Thij didn’t really care for some fancy installation. They would much rather play a game of football or a board game. So instead of coming up with an installation we came up with a whole concept for a competition in which every resident could participate and earn points for the area in the district they were living. We did use an installation, but one that displays the score of the five different areas in the district, making the community center the meeting place of the district. We won the pitch and the client asked us if we could  present it to the rest of their staff at their office.

Underneath is a video which we used to give the client an idea of what our concept was about. This video was edited by Maarten Haase.

After the concepting phase I was responsible for most of the visuals. I designed for excample the logo and the Thij-cup. 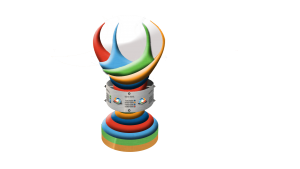 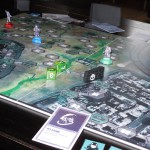 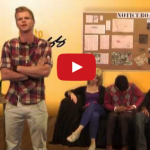